Yes… I know, so corny, but I couldn’t resist that title. So BEETS. Healthy, from the earth (under the earth) colorful, nutrient rich, RED or purple or golden or really pretty red and white, trendy too. I never want to be “afraid” of a food item… especially one that is so good for you. My mom and dad always had a jar of pickled beets in the refrigerator, always. I love pickled veggies but the beets in the jar were never appealing to me. The best way I could describe the aroma from that jar would be “dirt disks”, eeeewwww.

Lately I have been approached by various beets… my son likes “daily roots” juice (lots of beets there) and occasionally I add a little bit to my morning smoothie to hide the greenish brown kale color.  I went to lunch with my friend Suzanne and two of the four salads on the menu included beets. Then I was asked to make borscht (beet soup) for a presentation at my church… borscht! So maybe it’s a good time to re-evaluate my position on beets.

Along with being so good for you, beets are quite lovely, and if you peel them and cut them up without gloves, your hands will turn magenta… one of my favorite colors. The salad I had at The Crepe restaurant in downtown Melbourne was delicious and due in part to the diced beets… never second guess French cooking.  As far as Borscht… it’s a very tasty soup with chicken or beef stock (I used beef) onions, carrots, parsnips, cabbage, leeks and grated beets and dill with a hint of apple cider vinegar to balance the earthiness. I just finished my first ever bowl of Borscht and would definitely make it again.

Tonight I’m cooking dinner for friends and I’ll be making a different soup; carrot, lemongrass and ginger bisque along with grilled salmon and a mixed salad with fresh beets and a Meyer lemon vinaigrette. If you, like me have avoided beets in your diet, you might want to re-consider. (Unless you love the color magenta… wear gloves.)

the bone stock for the carrot, lemongrass soup

Beets… what a beautiful color

cooking down the veggies for the Borscht 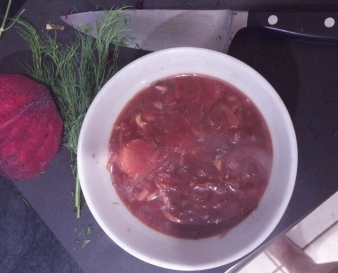